August is here, the Olympic Games in Rio open today and the Chiefs bowed out of the race for top honours in the Super rugby competition last weekend. No more Super rugby to watch for a while, but the action coming out of Rio will certainly keep us entertained over the next couple of weeks. Now that calving is winding down hopefully there will be a bit more time available to take in some of the highlights of the games and enjoy some possible golden glory for the Kiwi team.

I had it in my mind to refrain from speaking too much about the absolutely appalling weather we have all been coping with during the last month or so. However, I do have to state that the rainfall we have received in July, right up to today, has certainly been a challenge to man and beast (and wife also, although to a lesser extent!!). Winters of late have been reasonably kind, but this year has seen conditions as challenging as I can remember. It wasn’t just the amount of rain we received, but the sheer frequency of it. Relentless daily downpours seemed never ending. Blow me down, as I write, down it comes again!! And that’s after I sent several texts to fellow farmers this morning gleefully sharing that the sunny weather had arrived for a while!!

In spite of the big wet, calving has gone well to date. Care has been taken to minimise pugging, and with that comes a lot of work. Getting springers moved before daylight, bringing milkers onto the pad early in the afternoon, moving lates to a standoff area and then standing springers on the pad overnight. The big challenge, as always, is to do the best for the soils and pastures whilst being as kind as we can to our cows so as to minimise lameness and tiredness. I don’t know that I could farm without a feedpad anymore. Being able to stand cows off and feed them supplements to avoid weight loss is just so good. But wouldn’t it be nice to have a covered herd home or something similar?? The benefits of some sort of cow housing in seasons like this are huge. I jealously think of all the farmers I know with herd homes etc and I go green with envy…… however this changes pretty quick once the sun shines again and I think of all the money I have saved in not building one!! 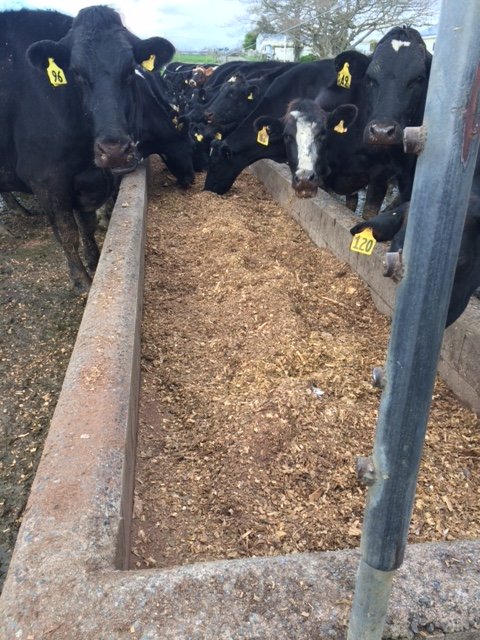 We have our yard temporarily covered once again in the finest wool carpet from Axminster and Bremworth in order to provide a more comfortable surface for the cows when they are standing off. This works a treat. We can hose it and keep it clean and the cows certainly prefer to stand on it rather than on concrete. We feed the springers on the pad and leave the gate open onto the yard for them to go and ‘camp’ on overnight. I had them on there again last night and as many as possible were sitting down quite happily. I had to give a few of them a boot in the backside to get them up; similar to what I have to do in the house when I get in for breakfast!!!

Going forward, we need to try and stick to our spring rotation planner. This will be easier when things dry out a bit, starting in about half an hour (I hope!!). I am keen to get calves outside asap as the sheds are pretty full. Using sexed semen has worked well once again and the regular heifer calf pick-ups for the Chinese market helps the cashflow. I am thrilled with the rate that the 2 year heifers calved at. I think after 3 weeks we only have 5 to go out of 43. I see this as a result of having well-grown heifers that are hitting their liveweight targets at key times. Our grazier has done a great job with them and I know that other lines of heifers from this same block have calved equally as well.

Days are getting longer, spring kicks in in around 25 days and the latest GDT auction went up. We have lots to look forward to! Plus our eldest daughter is expecting her first baby shortly and Ali Baba, the stage show, begins on 1st September in Te Awamutu. Not to mention the youngest daughter finishes Uni shortly and will hopefully start earning some money and repaying some of the financial contributions I have gifted her with during these past few years…. Exciting times ahead!!

Till next time, soldier on, keep smiling and looking forward positively to what exciting things lie ahead!!